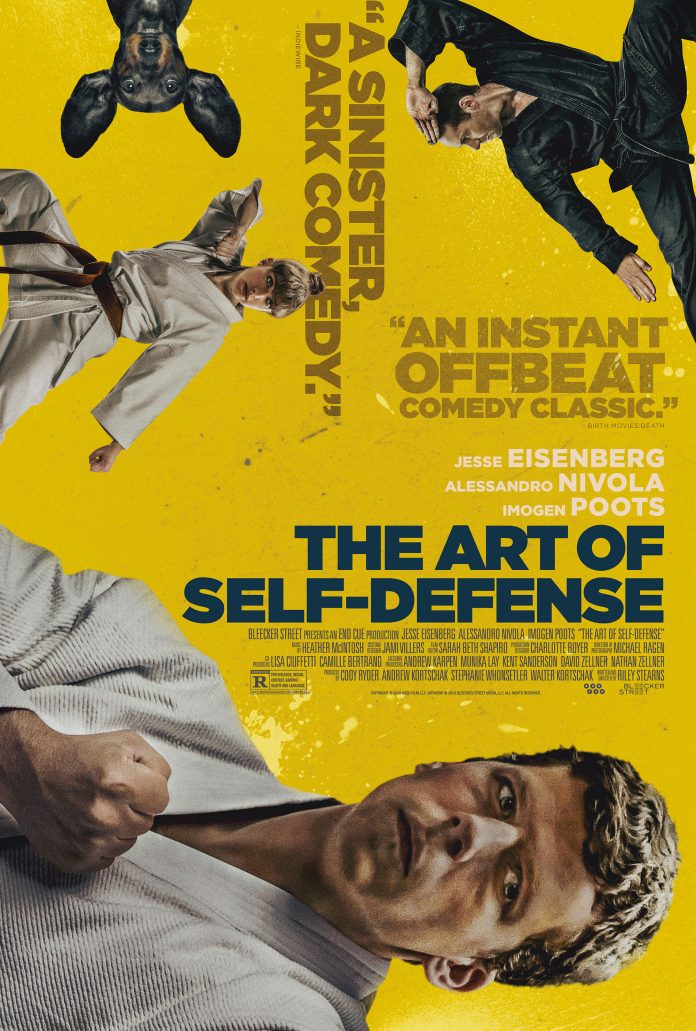 Self-defense in Riley Stearns’ dark comedy breakout of 2019 is not what it seems. This brutally funny comedy has Jesse Eisenberg star as Casey Davies.

Davies is a man who lives in the warm blanket of a comfortable routine, until one day his world is rocked by a group of bikers who assault him on the street. He looks to stave his constant fear of other people by enrolling in a martial arts class. Here he is taken under the wing of its instructor who calls himself “Sensei.” Casey takes great strides in becoming a stronger person, the kind of person he used to fear, but there is a darkness stirring within the studio that becomes more and more apparent to him as he grows.

The themes of this movie speak loudly in a simple tone. Imogen Poots plays Anna, a dedicated, fierce member of the dojo who is often mistreated as she is “not very masculine.” Sensei encourages all his students to listen to metal music, subscribe to “masculine” cultures (such as the German language), and most importantly to be a man.

Anna is given a boiler room to change in and is refused a position of leadership in the dojo because Sensei believes “her feminine tendencies” prevent her from reaching her full potential. Toxic masculinity is delivered disturbingly matter-of-fact. Many of the lines will make you widen your eyes with disgust or surprise, but should work like a mirror for the ones in the room who know who they are. The delivery is very clever and quite effective.

Eisenberg plays a similar role in most of his movies, and while Davies isn’t a far cry from the rest, there is certainly a sympathetic change taking place. The audience can’t help but take complete pity on him, and cheer him through his vengeful acts of violence towards the end of the film. His transformation is subtle despite the blatant pull of the writing. It is a cute and pitiful character that fits Eisenberg’s bill better than any performance to date. The entire cast does a great job feeding the quirks and building the world to the point where it becomes an ensemble piece rather than a study on a character.

The picture direction is done by Michael Ragen, who has worked with Stearns in the past. It looks very neatly done (nearly by the book) until your vision is taken away from the action to examine small details of the world. It’s fair to say the cinematography matches the dialogue in most cues. It is simple, cleanly delivered, and very matter-of-fact. The earthy tones and persevering yellow make the mood a consistent autumn cool. It is a uniquely pretty film, and promising for the future of Ragen.

All of the pieces fall together perfectly in this film, and the expert comedy makes it infinitely rewatchable. All the events of the film make up the rise and discovery of Casey’s new self. In all aspects this movie is unique. For its style, its charm, and its constant wit, I award this film a four out of five.